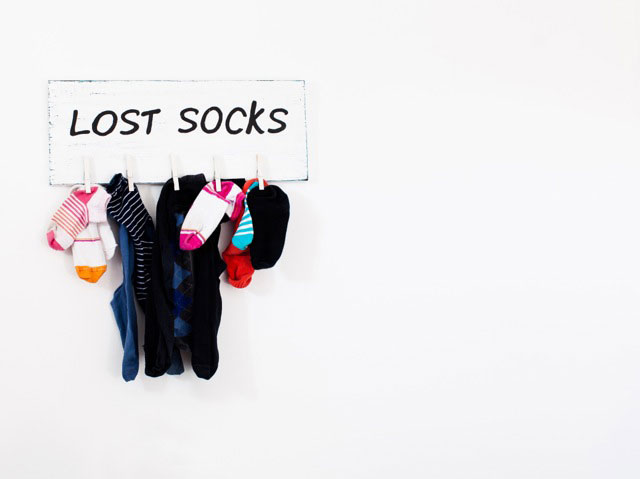 Another day, another pair of mismatched socks. Someone could make a fortune writing a book about missing socks and other mysteries around the house. It seems like every time you turn around, the laundry basket harbors another sock that has no partner. Missing socks: Where do they go? There are many missing sock theories that we can investigate. With any luck, maybe we can solve your missing socks mystery, or at least investigate the multitude of conspiracy theories.

A widely held missing sock theory is alien abduction. Considering that we don’t have a clear picture of what aliens look like, perhaps they only have one foot. If that were the case, they would only need one sock, right? Or maybe the aliens sneak in and steal a sock here and there to make a nice patchwork quilt for the mother ship. It might not seem likely to you, but is it possible?

If missing sock theories have any connection to making money, the appliance company conspiracy is another solid possibility. Could the appliance makers and the sock manufacturers be in cahoots with one another? Think of the money they could be making while you are busy searching for two socks that look even a little bit alike. This missing sock theory imagines the dryer guys installing a hidden compartment in the back of the dryer that sucks in one sock for every ten you put in the dryer. These socks sit in the mystery compartment until they decompose and become dryer lint. The appliance company then gets a kickback payment from the sock guys when you go buy new socks. Hmm… could be!

Maybe your lost sock isn’t lost after all. Maybe it ran away. Not every sock is content to sit in a drawer until you feel like picking him to wear. Maybe your sock was tired of being walked on and stuck in your smelly shoe. Perhaps he had bigger dreams and ran off to join the Sock Circus. You might see your sock again. Maybe he will tire of sock stardom and come back home, or maybe you will just have to let him go. Either way, be kind to the sock that is left behind: He is probably very lonely.

Do you remember those kind of scary, very weird movies about magical creatures that could shift into the form of some other person or animal? Shape-shifters make great science fiction, but what if your socks possess this amazing ability? Maybe you aren’t missing any socks at all: The ones you have just keep changing their appearance. Right now, there is a pink striped sock sitting in your drawer, chuckling, while it plans to be an orange flowered sock by tomorrow morning.

The missing socks mystery may never be solved. Conspiracy theories are everywhere. Your socks may be conspiring against you, or the money-makers in the sock world could be at fault. Maybe your garden gnome has some strange affection for your socks, and when he comes to life, he sneaks in and grabs a sock or two for his collection. It doesn’t matter which of the missing sock theories you believe in. The bigger question of where they end up may never be answered.